Home The Battle of Passchendaele 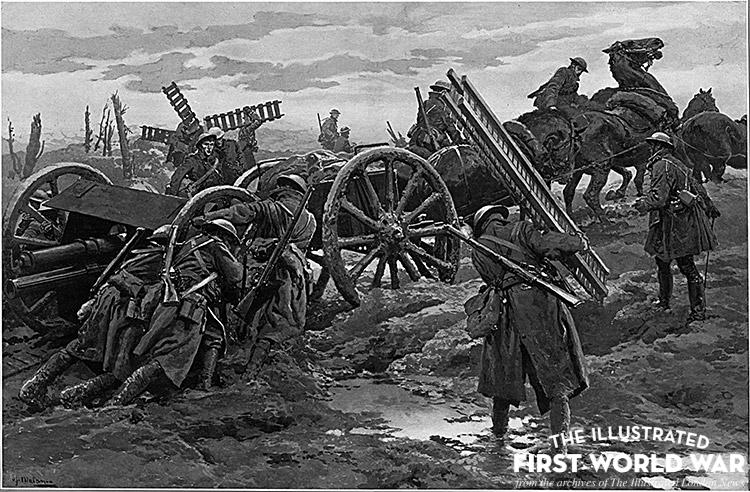 Initially referred to as the “Battle of Flanders” in the The Illustrated London News, Passchendaele is infamous for its heavy casualties and impassable muddy terrain. Douglas Haig, Commander-in-chief of the British Expeditionary Force (BEF), had received intelligence suggesting that there could be a mutiny within the French ranks. Haig determined that an offensive in Flanders could provide much needed relief for the exhausted and demoralised French army, and stay the possibility of an internal rebellion.

The British began by simultaneously detonating 19 mines along the Messines Ridge, burying thousands of German soldiers. Capture of the ridge was immediately followed by an artillery bombardment of the German front lines nearby for the next two weeks. In a striking illustration of the British shelling, the ILN described how the “whole horizon [was] blazed”. However, the German forces simply went underground into their reinforced bunkers and the shelling served only to churn the already muddy battleground.

The infantry began their advance on 31 July 1917, but the churned soil combined with exceptionally heavy rain had transformed the battlefield into a swamp-like arena. An illustration by Fortunino Matania in The Sphere depicted the difficulty British troops had in travelling through these awful conditions. Horses, men and gun and supply carts sank and struggled to wade through the murky mud. The ILN described the battlefield as “a sea of clay and water in Flanders” that “clings like rubber… [and] no use to try and back out as struggling only forces you deeper and deeper into it”.

Mud was not their only problem – confusion within the ranks combined with strong German defences served to further slow the British advance. After a long stalemate, the fighting temporarily resumed on 16 August, but with little gain. The British had some success at the Menin Road, Polygon Wood and Broodseinde between 20 September and 4 October, but these did not make up for the massive casualties that were inflicted on them.

As the battle progressed into late October, the scale of the casualties worsened. In one offensive 2,000 soldiers were lost with a mere territorial gain of 500 yards. Eventually the British captured the village of Passchendaele, with considerable Canadian assistance, on 6 November, marking the end of the battle.

Haig claimed that the offensive had been a rousing success, yet only five miles had been taken and British losses were estimated at 275,000. Predictably, the ILN reported that the great battle in Flanders had been a great victory for the Allies. The Canadian regiments, in particular, received great praise for their “final triumph [in] the long series of hard hammer-drives… and no troops could be better”.