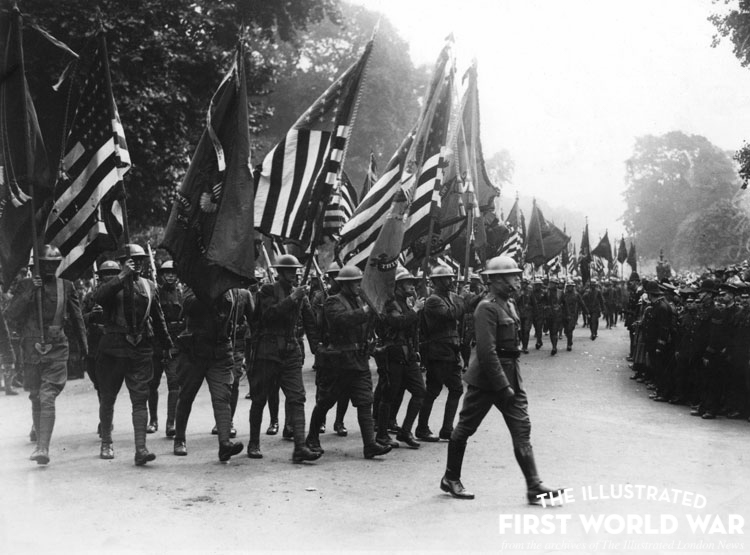 American troops marching through the Mall in London

As the war progressed, there was mounting US public opinion against Germany. Americans disapproved of the German policy of using its U-boats to target merchant vessel suspected of carrying supplies to Britain, neutral or otherwise, particularly after the loss of 123 American lives with the sinking of the Lusitania in 1915. The Illustrated London News conveyed these sentiments with a quote by US President Woodrow Wilson:

“The present German warfare against commerce is a warfare against mankind. It is a war against all nations… Submarines are in effect outlaws, when used as the German submarines have been against shipping.”

In 1917, the USA’s entry into the war looked more likely. The final straw was a telegram sent by the German Foreign Secretary, Arthur Zimmermann, to the German ambassador in Mexico, Heinrich von Eckardt. Known as the Zimmermann Telegram, the coded message suggested that if the US entered the war, Von Eckardt should broker an alliance with Mexico. In January 1917 this telegram was intercepted by Britain, decoded and handed over to the US government. Initially thought to be an elaborate fake, American suspicions as to its authenticity were soon quashed when Zimmermann himself gave a speech that confirmed its existence.

Britain was pleased to have America as her ally, demonstrated by reports in the ILN of American flags being flown throughout London. However, upon their declaration of war, the United States was not a formidable military power. The USA had no tanks or fully equipped divisions, no experienced commanders, no modern training system and only 55 planes – its military power was ranked behind Portugal’s.

The US Senate Finance Committee Chairman, Thomas Martin, expected the American contribution to the war to be purely financial and naval. This was not to be the case as President Wilson ordered the armed forces to be increased by half a million men. The pages of the ILN were subsequently filled with articles that portrayed America’s progress in recruiting and training men and adding to their military arsenal.

America’s extra manpower and supplies gave the Allies a distinctive edge over the Central Powers. American participation also marked the beginning of the USA’s emergence as a world power. Though the United States demobilised after the Great War, she emerged as the world’s unquestioned financial and industrial leader.