Home Zeppelin shot down in a blaze over London
On: March 20, 2015 By: Hannah Scally Posted in Blog, World War One Facts
0 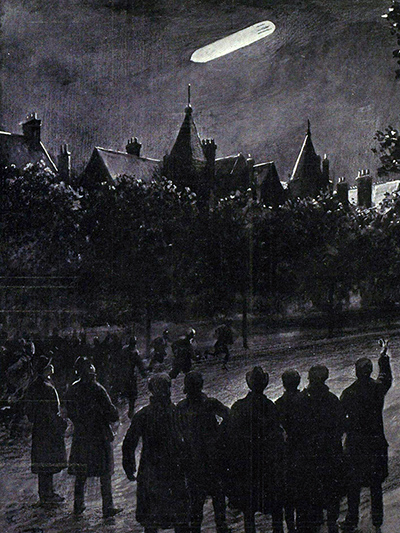 Civilians watched in the streets one night in 1916, when an enemy zeppelin was shot down near London. It caught fire and blazed like a lamp in the sky: a long balloon burning brighter every second as it crashed, slowly, north of the city. The light reminded witnesses of the gas-fuelled lightbulbs in their homes: ‘like an incandescent gas-mantle when it is first lit’. It was visible for miles around. When it crashed, a man nearby described “all the twisted ironwork smouldering at absolutely white heat. The flames ran up the side of it till the whole thing was in flames — mass of flame, the bottom of it tangled red-hot ironwork. White flames above. Incandescent.”
You can read the original newspaper report here, with a picture of the watching crowds.
The blazing crash meant a lot to the civilians below: it was the first zeppelin shot down over England after a more than a year of German air raids.
As aircraft, Zeppelins were unreliable, and their damage was slight compared to the Blitz of the 1940s. But for civilians at home, the danger was strange and new. Silent and invisible against the dark night sky, pregnant with bombs, zeppelins were an unprecedented terror from above.
Searchlights and long-range guns had appeared in cities and along Britain’s coast, but without success. That night it was a pilot from a night squadron, Lt. William Leefe Robinson, who gunned the ship down from his plane.
Lt. Robinson received a Victoria Cross for his feat. Later a prisoner of war, he died in 1918 from Spanish Flu. The zeppelin that crashed, the SL-11 (originally thought to be the L-21), had sixteen people on board.
Below you can find more newspaper articles about Lt. Robinson and the incident which made him famous.
Find more about zeppelins and air-raid panic here, or search for ‘zeppelin’ or ‘airship’ in the search bar above.